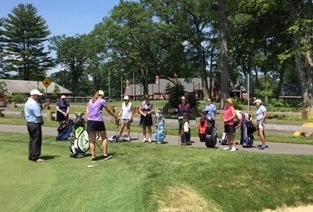 The golf course is open for the 2021 season!

All players MUST check in the golf shop prior to teeing off.

We look forward to seeing you at the course!

HARTFORD, Conn. (June 18, 2017) – Brooke Baker has never lived in Connecticut, but she sure has a special attachment to the Nutmeg State.

Baker, who grew up in Oklahoma and now lives in Sanford, Fla., has 25 relatives in New Britain, Berlin and Southington, where she stayed during the secondHartford Women’s Open. That includes two great uncles aged 90 and 89 years old, who walked nine holes in the first round of the $12,000 tournament Saturday at Goodwin Park Golf Course.

The elder statesmen weren’t around for the second round Sunday at Keney Park Golf Course, but Baker was quick to relate some good news. She rallied from a bogey-double bogey finish on the front nine with four birdies in an eight-hole stretch on the back side, capped by an approach to 2 feet at No. 17 that gave her a second even-par 70 and a tie for first place with amateurs Stani Schiavone and first-round leader Angela Garvin.

Renovation of the year 2016